I heard about the airbox mod ages ago (here tigertriple.com) but never got around to doing it because:

a. I never really understood what it was, and

What is this Airbox Mod You Speak of?

Here’s the part I removed

There’s a chunk of plastic in the airbox that doesn’t appear to do anything useful but probably impedes air intake.

Why did Triumph put it there in the first place? Dunno, but I do know that manufacturers sometimes do things like this to ensure they pass emissions tests.

So How Did it Go?

And here’s some of the damage I did. Bolts that were drilled, sawn and hammered… 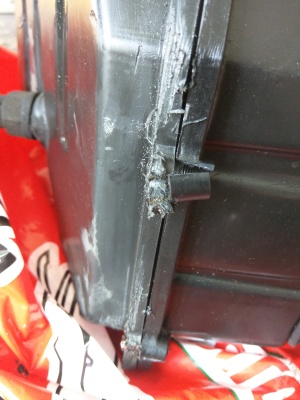 …what’s left of two of the bolt holes…

…and finally (hopefully) a bolt that would not return and is now frozen forever, unsure of whether it is in or out.

Fine.  Did anyone watch ‘Better Call Saul,’ I thought it was great…

…okay, the job was a bit of a pain.  If you follow the tigertriple link, above, you’ll see there’s some advice saying it’s better to hack the plate out instead of splitting the airbox.

I split the airbox, anyway, because I don’t play by the rules and my spirit can’t be broken.

Before you do yours, have a good think about doing it the other way.

The airbox is still in good enough shape to be functional but I haven’t put it back on the bike, yet (waiting for Scottoiler part to arrive; it goes under the airbox).  Hopefully, that protruding bolt won’t foul anything or I’ll be reaching for the torture instruments again.

Okay, I’ve ordered this.  It’s a front brake master cylinder, complete with lever, from a  ZRX1100.  I was fed up of whinging about the brakes so I just ordered it from eBay without thinking about it too much.

We’re home now and the master cylinder is due to arrive today.  I have to keep a watch out the window because DHL can’t get a heavy item like this up the 5cm door step to our building so they tend to just leave a ‘you were out’ notice then bog off for a fag.

Hopefully, the master cylinder will arrive shortly.  I’ll slap it on, test the bike and update this blog with the good news that the infamously bad Tiger 955i brakes are now fab.

I should really credit this chap http://tiger955i.adrianmolloy.com/Brakes.html

Surprise, surprise: it didn’t arrive. No chance of it coming till Tuesday, now, because of Jesus, chocolate and not really being dead when you die. Or something.

I might as well get on with other maintenance.

The bike passed! I’m glad we used Gray’s in London.

Okay, so what have we learnt?

Hmm. A year after resurrecting our Tiger 955i and riding it home to Berlin from the UK we are… a bit stuck for an MOT test certificate. Luckily it’s the Easter school holidays, all the marking’s done and we’ve got nothing better to do than ride the 2300km round trip to go and get one.

Tiger running well but I must check the new steering head bearings before it goes in for the test. I may need to bleed the brakes yet again, too.

Tiger 955i brakes are just rubbish. For last summer I changed the pad retaining pins and started using red grease instead of copperslip. Over winter they seized completely. For this trip I’ve changed the lines to a racing configuration (two lines from the master instead of a bridge between the calipers). It’s made bog all difference. For the big trip, I’ll change the disks to EBC floating and replace the pistons. I might have a go at the master cylinder, too.

The second day at Ferme Neomie, was market day in Le Bourg so we all went in and pottered round the market stalls and cycling and outdoor shops. The market had that typical French feel and was full of atmosphere. The town is well serviced with a large supermarket and many smaller shops, cafes and restaurants. 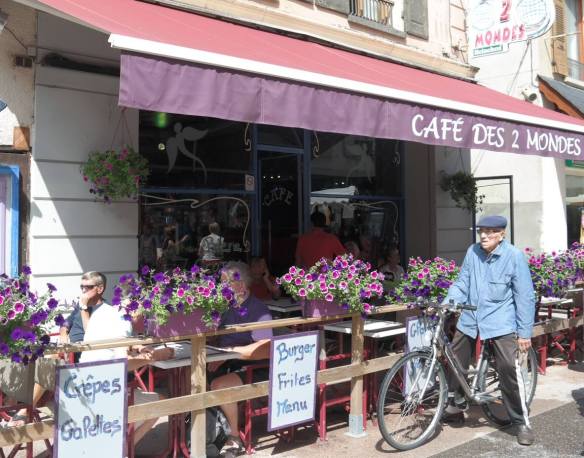 Back at the campsite, a few people had a nap due to overdoing it the night before. Helen strangely decided to have a go at preparing and cooking whole artichokes for the first time, on the tiny camp stove. They turned out great but were very labour intensive. Both Jerry and Helen developed a fondness for them and thought it well worth the effort. We had a great evening meal at the campsite cooked by Helen and Sarah and a bit less alcohol was drunk than the previous night as we all intended to move on the next day.

So far the weather had been fair at Ferme Neomie. Some baking, hot sunshine but also a bit of rain. Day 3 at Le Bourg was set to be hot and sunny, whereas the forecast for the next two days was not so good. We decided not to move on to the Val dÌsere area but to stay at Le Bourg for another two nights so that we could ,have a great ride out that day without the luggage, while the good weather lasted. We sadly waved goodbye to Sarah and Jerry until we see them again in Berlin at New Year.

Day 15 was a great day of motorcycling as we rode up Col Galibier, as recommended by Jerry. The ride up was pretty easy compared to some  other high alpine passes but the views at the top were superior to most we have seen. We headed off to Col La Croix en Fer but were beset by a series of problems which included the road being closed due to road resurfacing. We drove around in circles as the GPS tried to adjust to this fact. There was no prior warning of the closure and no deviation. The area around this pass is definitely worth exploring as it is much less busy than the area around Deux Alpes and Col Galibier. Again, however, we came across a very ugly ski resort, complete with high rise blocks. We also came across some very authentic, French villages which were all closed up for Sunday to balance things up.

Day 16 was spent pottering around the campsite and Le Bourg due to the threat of rain. We had moved from the emplacement we shared with Sarah and Jerry to the paddock. At first, it seemed delightful with lots of space, thick grass and wonderful views of the mountains. It was not until the first morning we awoke there that we became aware of the slug problem. Big black ones on the tent and in our stuff inside the porch. Dave rehomed them using an unwanted plastic mug.

The rain promised fro Day 16 had started early evening and by the next morning was heavy and persistent. Even our super, all weather tent was taking the strain. At least the slugs had been washed out. Dave heroically donned full waterproofs and went out to cook the breakfast. The rain lashed down for another 3 hours but we took advantage of a short break around 11am to pack up and move on to Grenoble. It was a miserable journey in the rain but only took an hour.

We had booked a hotel room near the station so that Helen could easily catch a train to Arles the next morning, where she was spending a few days while Dave met up with Jason and Spider for some more riding. It was embarrassing turning up at the hotel dripping wet with carrier bags of damp, smelly gear. The Ibis Styles had good facilities, including on site underground parking which they let us have for free, good WIFI and breakfast included for 75 euros. The shower was the best we have encountered all holiday. Also useful is the location of Carrefour Express next door.

Of just as much interest as the parking was the proliferation of Indian restaurants and ethnic supermarkets, all closed when we arrived. We smartened ourselves up and went into town on foot wearing our bike boots as they were our only dry shoes. The old town is what you would expect of an old French cityand, on a clearer day, the mountain views extend in every direction. The atmosphere was severely dampened by the weather though, as it had been in Turin. We found some vegan food a a pretty terrible falafel shop and fortified ourselves with a drink in a cosy bar.

That evening, we headed for Shiva Indian restaurant only to be told that they were full. The Bombay told us the same thing but took pity on us and found us a table with low level cushion type seating-just iike camping-which we could have for an hour and a half. The place was thriving and the staff were super friendly. The food was fairly good but not spectacular.

We’ve been to Slovenia before, about ten years ago. This time, we are on a brilliant bike. Last time, we were on a Yamaha Thundercat. We must have been miserable sods back them because we do not remember thinking that Slovenia was stunningly beautiful…and it is…remarkably so.

Yamaha Thundercat. Not a brilliant bike.

The weather was very mixed today and we had the waterproofs on and off a couple of times but we arrived dry, which is the most important thing when you are camping.

The scenery upon entering Slovenia from Austria, via cutting the corner off Italy briefly, was equally the best we have seen in Europe. We were so high up, looking deep into the valley below that it was almost like being on a plane. The tall, rocky Dolomites to the west and the green Julian Alps to the east and north were staggeringly beautiful. The road was also a lot of fun. It was as if everything had been shrunk down since Austria. The road much narrower, the mountains close enough to touch and finally the sun shining.

Bovec is an attractive little tourist town in a wonderful setting. A campsite, B&Bs, advertising rooms for 25 euros a night, two big supermarkets and a few bars and restaurants. Helen´s favourite place was the tiny greengrocers where they sold big punnets of black cherries and fresh, green figs which we polished off after a meal of tofu curry cooked on the stove. Slovenian beer is pretty terrible but then the people do not come across as party animals. We noticed that back in 2004 on our last visit. Good beer is clearly not a priority.