We spent 3 days camping in the desert at two locations in Arizona. First at the Lost Dutchman State Park near Phoenix. This is right next to Superstition Mountain, so called because of the rumours, going back more than 100 years, of gold in them there hills. Gold has never been found. The Lost Dutchman apparently got lost searching for it.

The area was beautiful, especially as the sun was setting.

It was only 15 minutes ride from the outskirts of Phoenix and we were able to visit the cinema to see Midnight Special. If you have not seen it, I thought it was a very good film. Not life changing but it kept me enthralled the whole time.

We moved on to a very remote location called Organ Pipe Cactus National Monument. This is only 7 miles from the Mexican border at Lukeville and it felt strange being so close to Mexico again.

We passed through a tiny town called Ajo (garlic in Spanish) but decided to wait till the final town of Why before getting food supplies. Big mistake as Why had only one gas station and nothing else. We decided to ride on to the campground and found it to be very remote and beautiful but we still had no food. We headed to Lukeville at the border, 5 miles away. There was again only a gas station but we did manage to get ice cold Heineken and Doritos and (oddly) cups of instant oats (the perfect camping breakfast for vegans). No dinner though, they only had Spam and Pot Noodles.

After a few beers, we dipped into the food bag and came out with some red lentils and half a bag of wholewheat fusilli. An odd dinner seasoned with some Cajun spice mix but enough to soak up the beer. 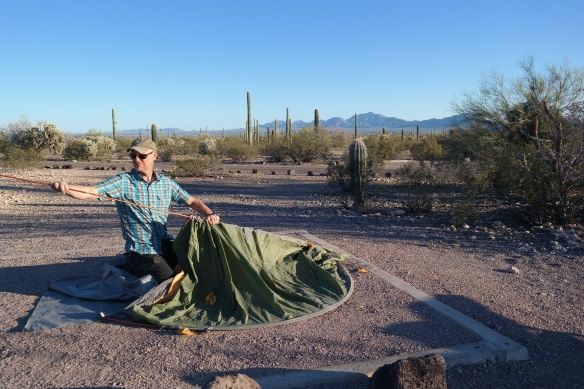 We soaked up the beautiful, desert atmosphere. It was very reminiscent of Baja California. Many of the saguaro cacti are in flower. You can see the buds in the silhouette below.

On the way into the campground there is a sign that says “Illegal immigration and smuggling takes place in this area. If you see anything suspicious report it to the Visitor Centre”. No wonder the campground was half empty. On the way back to Tucson, we encountered three road blocks/check points manned by scary looking US agents and about ten different patrol vehicles, hiding in the bushes (it was like an episode of Breaking Bad). We saw nothing like this when we crossed at El Paso a month ago but this area is much more remote and perfect for smuggling. We were glad we had decided to move on. 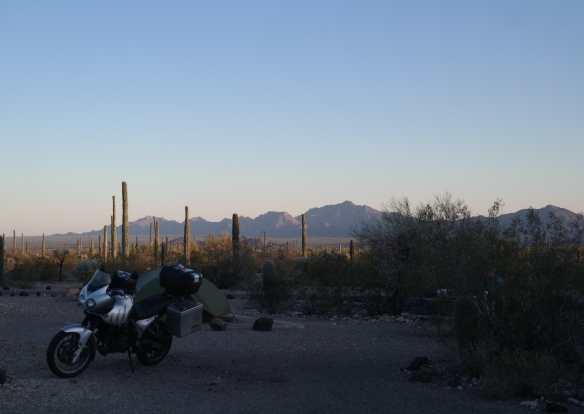 Today we begin the long journey east. We plan to be in Dallas for Saturday, in time for the Everton v Man. Utd. FA Cup semi-final, being played at Wembley. We have 1000 miles to cover before then. We will go via Roswell, New Mexico.We will spend 3 days in Dallas before heading towards New Orleans. We wanted to see Santa Fe and Taos but it is too cold up there for us and we also need to make progress and zig zagging north to south when you want to go east, slows you down. We will be sad to leave the desert but we only have 4 more weeks before the bike goes off to the shippers and we need to get to the Deep South and see something new.