We have had a wonderful and interesting week in Nicaragua. We left Leon for coffee country and spent a few days in the hills, riding on some good roads and one great road around Matagalpa, Estile and Jalapa. 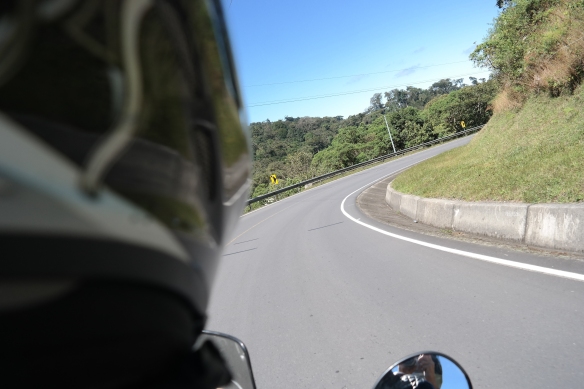 Plus a few interesting dirt roads for brief periods.

And a couple of stretches on roads that have been block paved!

This part of the country is much cooler than the coast and it was the first time we have experienced perfect motorcycling weather for many weeks with a temperature of about 27 celsius and clear blue skies. 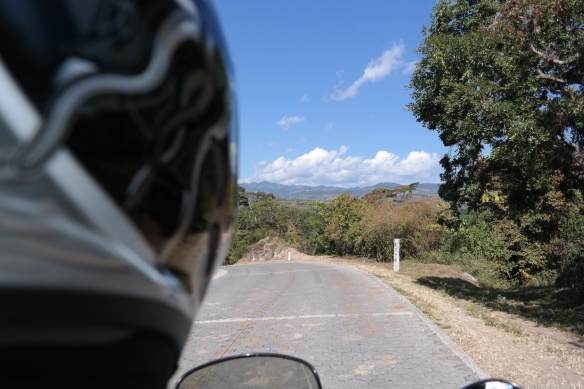 The volcanic nature of the country means the soil is very fertile. There are wonderful vegetables for sale everywhere. Vegetable photography seems to be my favourite subject after mountains.

This is the season for picking and processing coffee beans. I was surprised by how much of a cottage industry this is with very small processing plants and coffee beans drying on basketball courts and very other inch of available space in small villages. It is hard to see and photograph coffee growing from the bike as there are tall bushes along the road but the few plantations we saw were really beautiful with banana trees planted in between.Tobacco is also commonly grown here and you can visit cigar factories where they make the best cigars outside of Cuba.

The food and drink here is good. The national dish is Gallo Pinto a mix of rice fried with red beans and eaten as a substantial vegan breakfast with fried plantain and delicious home made corn tortillas and usually provided free by even the cheapest hotels.

The beer also comes in a litre bottle for $2 and is pretty good.

Northern Nicaragua is also famous as the birthplace of the Sandinistas who took power in a revolution in 1979 and were later involved in a civil war with the Contras who were financed by the US government to destabilise them due to their left leaning tendencies and ties with the USSR. We have seen both a plane and a tank left over from the war. These were much more exciting for Dave than for me as you can see. 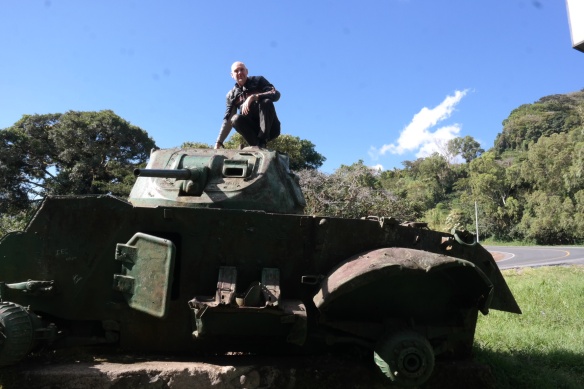 This war was very high profile in the early 1980s and Daniel Ortega, the Sandinista leader, was a household name, even in the UK. He has been back in power for the last 10 years and there are huge posters of him every where in the north. 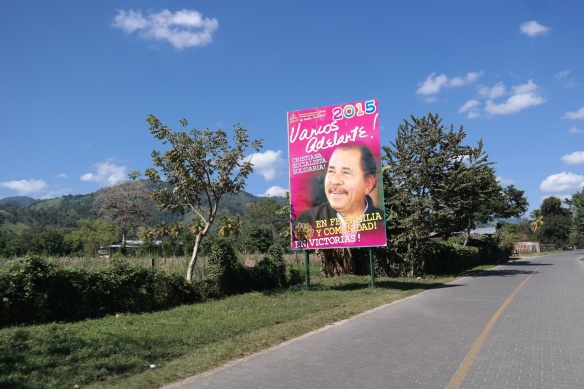 Nicaragua is the second poorest country in the Western hemisphere by GDP per head of the population but this does not tell the full story. As wealth is better distributed here than elsewhere (thanks to the left wing government) the country seems to be doing much better than you expect. It is a completely different experience to Honduras or even Guatemala. It is true that we have seen a lot more horse and bullock pulled carts here (usually a sign that people cannot afford anything else) but people are purposeful, there is plenty of agriculture and everywhere is clean and very well maintained.

How the locals travel 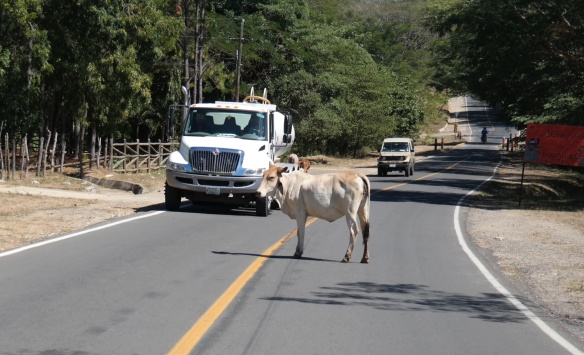 Roads are good and people seem to be living fairly decent lives. It is also a much safer country than most in the region and we have seen very few guns.

We have been stopped by the police a lot but not in a way you would expect. In four or five stops we have not been booked and they have not tried to extract a bribe. They have checked our documents to make sure we own the bike and have insurance and they have warned us to ride safely (they do not like you overtaking lorries across the hard yellow line even though most roads have a hard yellow line). It is irritating to be stopped so often but hard to complain.

After coming down from the mountains two days ago, we spent two nights at a wonderful casita on a gated community near the capital Managua. Lying in a hammock yesterday evening watching hummingbird was a real highlight for me. 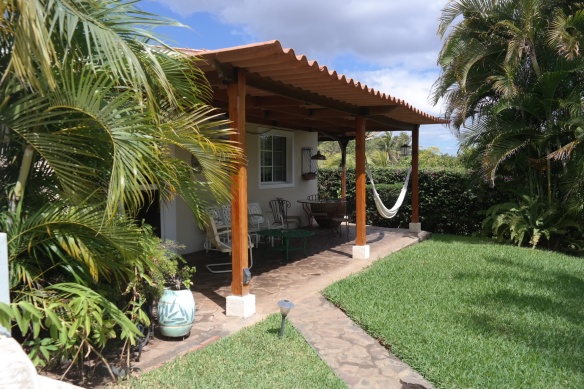 Dave had the chance to visit and befriend the Triumph dealer Frank and source some parts for the bike, some of which we have taken possession of and others that we will collect on the way back from Panama. The bike had its first wash in months.

During this time, I have written over 5,000 words of my thesis and I am really pleased it is going so well. I have also been able to keep up my new exercise regime of circuit training. We are both feeling relaxed and healthy.

We have now moved to Granada-another beautiful colonial town but I will write about that next time. Dave has a video interview for a job which he has to complete before we leave the hotel here. We then plan to cross into Costa Rica.