Cyclegear is run by rotund, jolly Mayan types… do the spannering yourself

About ten years ago, somebody told me that if you put Metzeler Tourance (original) tyres on your bike, you can then forget about them; they will never puncture and they will never wear out.  Well, our front wore out; it has the dubious honour of being the first part to be replaced twice on this trip (or any of our trips).

Going over these blog posts, it looks like it did 7,000 miles; that’s not all that much for a front tyre but, in fairness, we are fully loaded and the rear suspension is high making us more nose down than usual.

By this point we were heading for Belize and Guatemala and really had no idea where to get a tyre.  With a vague feeling akin to dowsing, we headed for the Yucatan and the cities of Merida and Cancun. 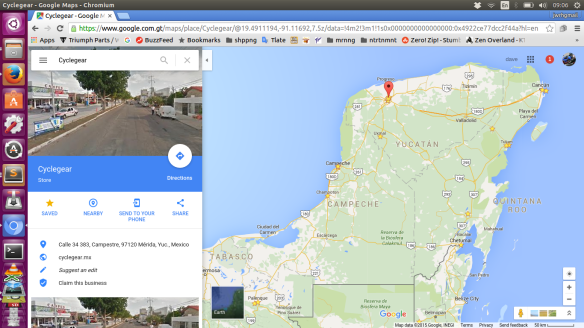 Cyclegear – go there and buy a tyre

In Merida, we tried Ducati, Kawasaki, Motomundo (closed down) and a BMW dealer that only had cars till we happened upon Cyclegear.  Cyclegear had a rack of modern large capacity motorbike tyres like it was just normal.  They didn’t have a Metz in our size so we got a Bridgestone Battle Wing.

I used my last filter and did  an oil change in Puerto Escondido on the coast in Mexico.  Till then, we had topped up with USA sourced 15w50 Mobil 1 but, once that ran out, we needed to do a change because in Mexico, Mobil 1 is 5w50.  Silver seems happy with the new oil and we have brought a spare litre with us through Belize and into Guatemala.

Silver is now so filthy he must only be photographed at a distance.  Two bolts have rattled loose, one from the dash and one from the hugger that already has a tenuous grasp of life.  I haven’t cleaned him properly since sometime in California although I did wave a hosepipe at him in Merida on the Yucatan.

Triumph triples are really smooth; the bolts have rattled loose because of the increasingly poor surfaces we are traversing.