We spent last Sunday and Monday on the campsite at Santa Cruz that we had visited the weekend before as we needed to do work on the bike to replace the rear wheel bearings. It was a pretty dull couple of days. The main highlight being the racoon raid in the night. Our fault entirely as we forgot to lock the bear box. Luckily there were no bears there. 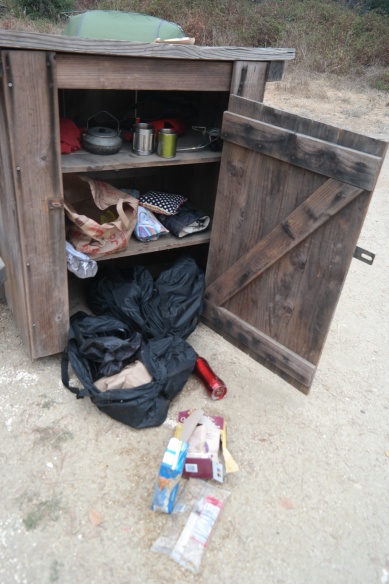 They also attempted to steal the bike. 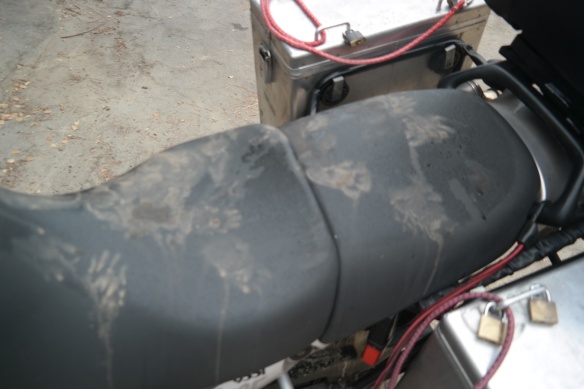 Having sourced the bearings at two different shops, Dave replaced them easily and did some work on the front brake. 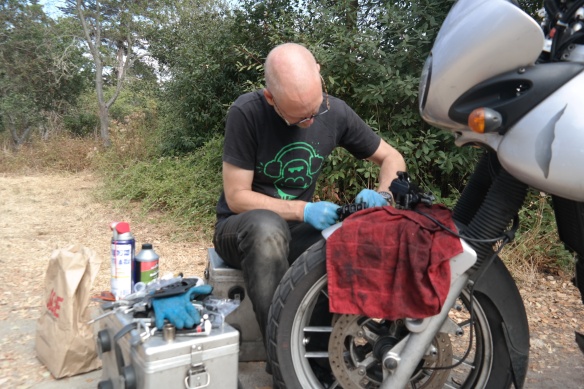 We had some friendly neighbours who brought us a beer and chips in the afternoon. The lady was Korean/American and made comment that we were a skinny couple! I am sure this is normal for Dave but I have never been called skinny in my whole life. We proceeded to pig out for a couple of days, safe in the knowledge that a tiny Asian woman thought we were skinny. On the last night we were treated to a spectacular sunset on the second night (no Photoshop). 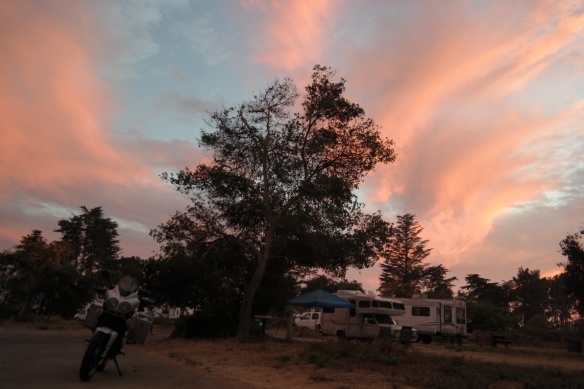 We then headed down the coast, through Carmel (where Clint Eastwood was mayor and where, according to Dave, Play Misty for Me was set) and onto Big Sur. The coast was stunning but busy with tourists driving very slowly and the weather was overcast. At the end of the journey we found a wonderful campsite at Big Sur, where we ended up staying 3 nights. They had the cutest campsite shop (with WiFi on the deck and a power socket) where we seemed to spend most of the two days, working on job applications and doing other business. 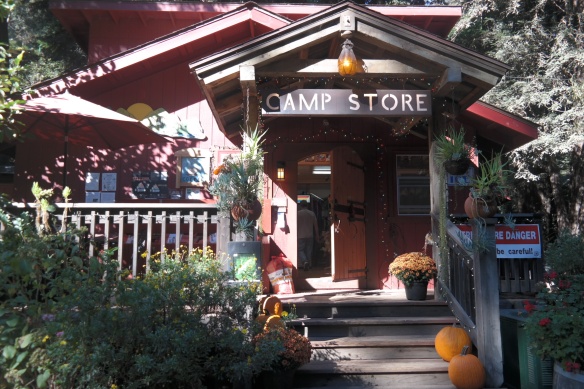 It appears the shock absorber on the bike needs work presenting Dave with another maintenance conundrum. This one was complicated by the fact that we have to leave the USA by 15th October so have limited time to resolve the situation. Fortunately, Hagon, who made our current shock, have a shop in San Diego. There was no mobile phone service so Dave had to hot foot it to the local phone box (remember those?) to call them. When they heard of our situation they offered to ship a new shock from the UK to meet our deadline, fit it and charge us only the cost of rebuilding the present shock. That is true customer service. So we await the arrival of the shock in San Diego in about a week-we hope. 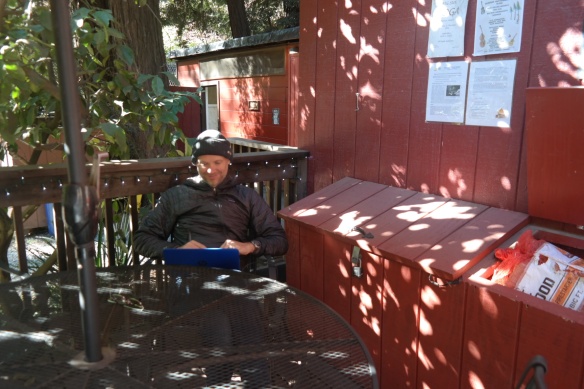 Leaving Big Sur to ride down the famous Highway 1, along the Pacific was one of the best days I have ever had. It was simply spectacular the whole way. We even had sections where there was no other traffic. The road wound round and up and down with ocean views for a solid two hours. 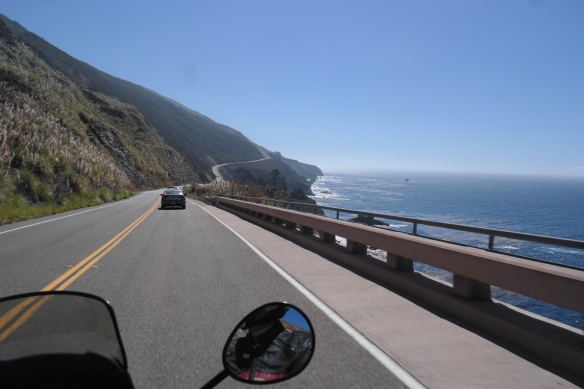 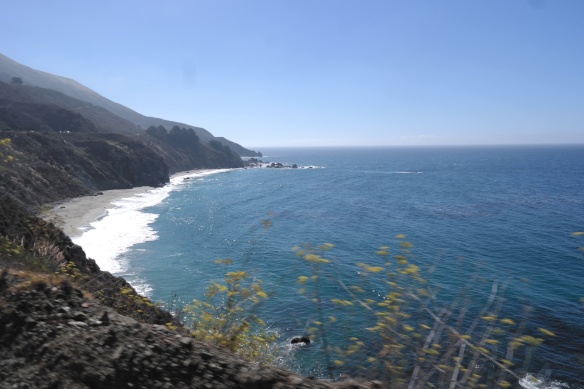 This coast is famous for the humpback and grey whales that cruise near to land. When I saw my first whale tail breach from the water, as I whizzed past on the bike, I was totally shocked. Another ambition realised. 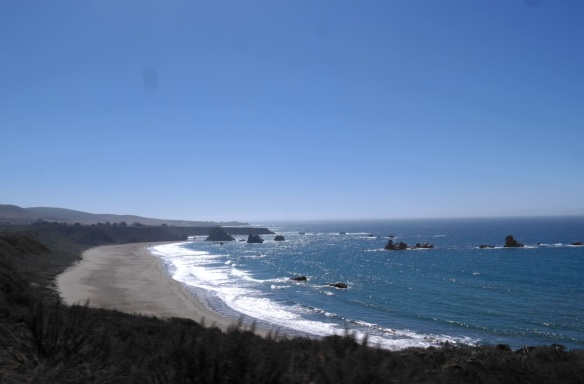 No point staring hard at the photos trying to see whales as they were too far out to photograph with an 18-55mm lens. Good for landscapes but not for wildlife. All of these shots are taken from the bike at about 45mph (as are most of my blog pics). 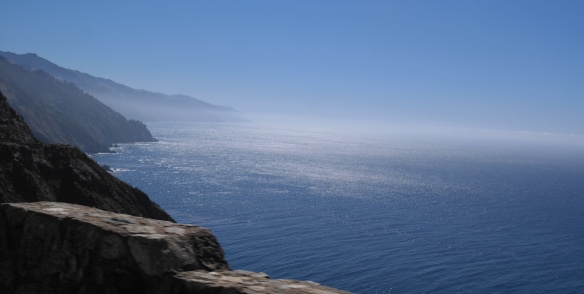 About half an hour later we saw another whale breaching the water and pulled over and watched it for 15 minutes. It was only the massive fin this time but pretty special nevertheless. 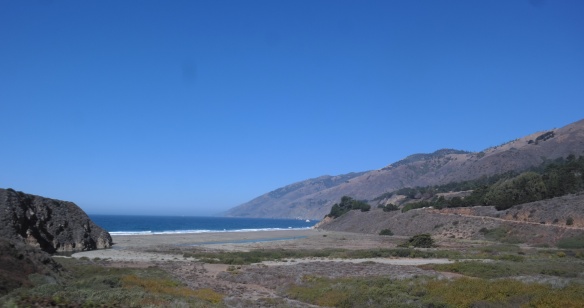 The next treat was a beach full of pelicans. And then a field full of elk. 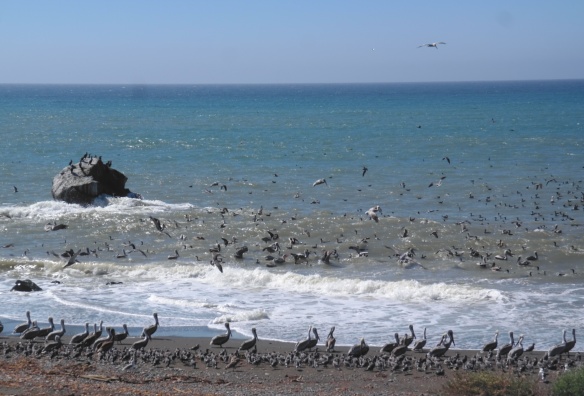 And then a few beaches full of elephant seals. We were able to get really close to them at one point. They were so funny to watch, as they flick sand over themselves and roll around in the sunshine. Perfect couch potatoes. 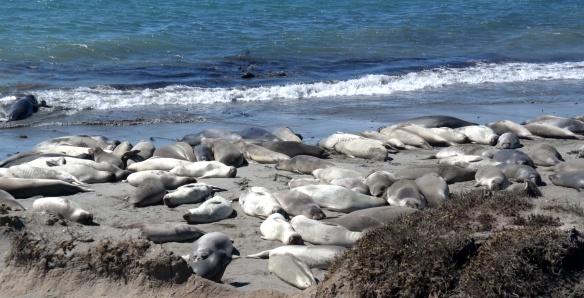 We stopped at San Simeon where William Randolph Hearst (famous publisher who was the inspiration for the film Citizen Kane) built his castle. There was a stunning local beach and pier. 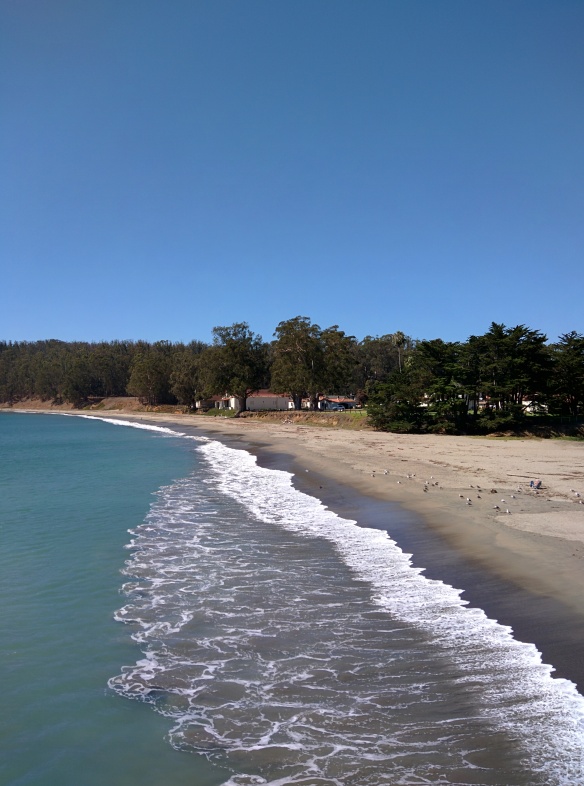 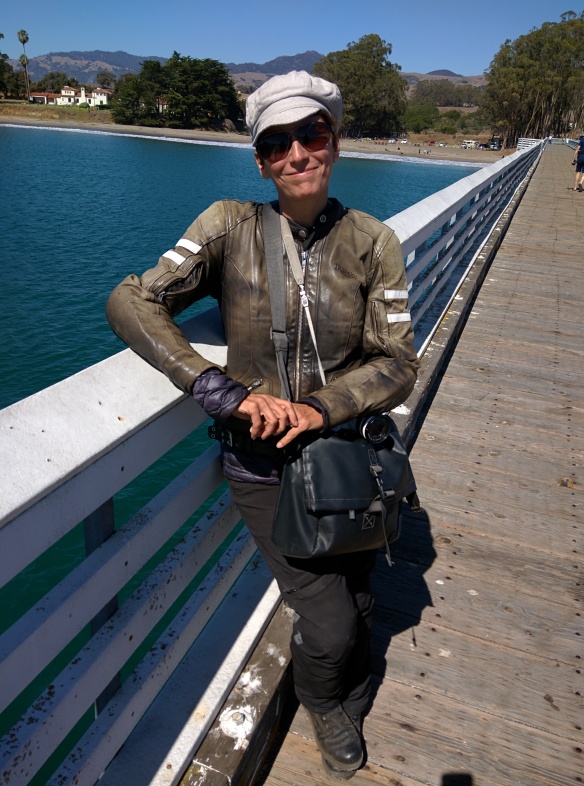