We woke up in Memphis to a traditional southern breakfast, vegan style, courtesy of our wonderful host. This included biscuits, which are like very light, spongy scones that are eaten as a staple here in the south. We have eaten very well indeed over the past three or four days, too well in fact but I think that it is normal in the south to feel overfed when you leave. The conversation at breakfast, with our host and another guest, was at an incredibly high level for 7am (at least by our standards) and I am sure was fueled, almost entirely (on our part at least), by the strong coffee. Both the breakfast and the coffee kept me going all day.

The first part of our USA journey has now been completed and we are entering phase two, which involves crossing the flat prairie to arrive in the Rockies in Colorado. This should take up to a week. It is not a relished prospect as the plains are hot and flat but we are planning to make the most of it. As we left Memphis, we crossed the mighty Mississippi for the first time. We will not see it again until we return to the US in the spring. It is just as you imagine, wide, languid and brown. You cross the border into Arkansas almost immediately and the flatlands begin. We rode miles of featureless dual carriageway for nearly 100 miles. There was nothing but potato, peanut and soya bean fields. No houses, nothing. As you approach the north-western corner of the state, bends and small hills appear. There are a few settlements. It all looks quite rundown. Lots of abandoned diners and overgrown junk shops. Rusty cars in the middle of empty fields. Apart from the town of Hardy, which is the closest to a Wild West town we have seen so far, there is nothing remarkable. Sorry there are no pictures but we were keen to make ground.

I was forced to make my own entertainment as when crossing Pennsylvania. The church signs came up trumps again. My favourite were

I also saw a shop called Custum Fitt (I hope that is a joke)  and a hitchhiker with a sign that read Eureka (is that a place or had he been struck with an idea?)

We saw some cool place names. We passed near Pocahontas and drove straight through Bono. We also passed Egypt and we stayed at Flippin.

The campsite was right beside a huge road bridge, over a river. It is testament to how chilled I am that I will now consider staying next to a noisy road. To be honest, the crickets almost drowned it out. By way of compensation, the site had lots of grass and a huge covered area with comfy seats and electric sockets right on the river, with its resident heron and hawks circling overhead. We tried to get a close look at the herons before they flew off and noticed two deer grazing about 50 metres away from us. When the owner went home, we had the whole site to ourselves. It was perfect. 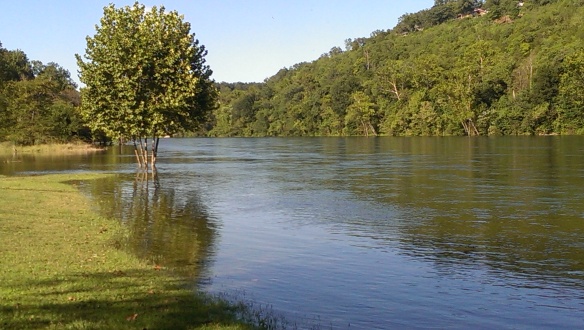 I guess the highlight of the day was that I got to post on Facebook that we were only 24 hours from Tulsa. My next Bacharach reference will be in California when I can ask someone if they know the way to San Jose. I have to wait about 6 weeks for that one.

We woke up to a thick mist across the river. It was really stunning. The journey into Oklahoma was as dull as the day before but we seemed to make better ground. As we left Arkansas, I saw a huge billboard that said “It is not racist to be proud of your people-start here with White Pride Radio.” Just as we were thinking Arkansas was the least friendly and welcoming state we had passed through so far, we had two separate guys come up to us on a car park and strike a conversation about the trip and bikes and their own plans for the summer. 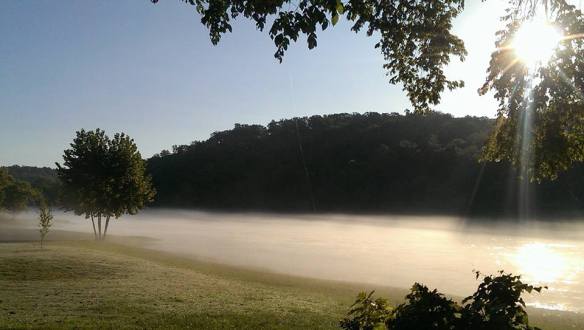