After a night in a motel where we charged up the devices and updated the blog, we were ready to camp again. It seems weird sleeping indoors and we don`t like it much. My Vivofit 2 shows that I sleep a lot better in the tent, even with the threat of bears. Having said that, we enjoyed the experience of eating in a restaurant for the first time in the US. The food and service were excellent and the cost was as low as shopping and cooking, which was a surprise. The modern motel experience, on the huge out of town mall,  is pretty soulless though and should only be used occasionally in my opinion. 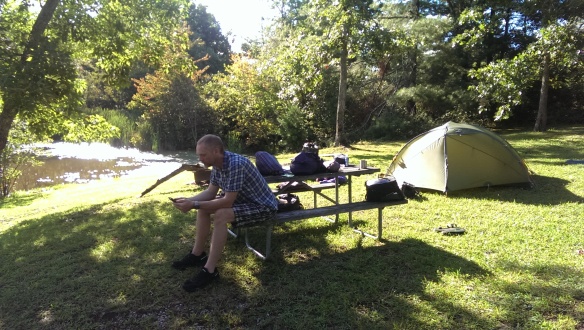 We had a huge bag of wet stuff due to the rain so we decided to go for a commercial campground with a laundry. We were cautious about declaring the Ballyhoo Campground paradise as we had done that two nights before, only to be deluged. However, this did turn out to really be paradise. I have seldom, if ever, come across such friendly and caring hosts who tend their site so well. The laundry had a whole waiting room where you could connect to the Wifi, plug in your computer, read from their library or play table football. We managed to get everything washed and dried and it was great to feel clean and ready for the next leg. 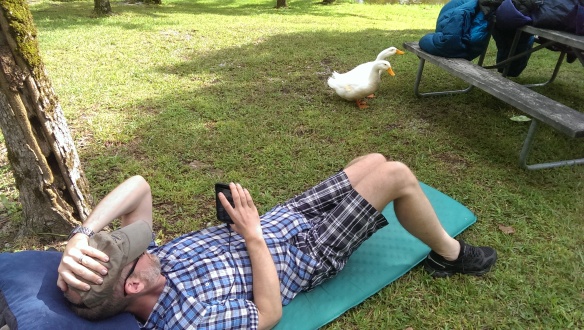 The place was built around a small pond which seemed pretty ordinary in the daylight but near dark was alive with dragonflies and then fireflies as darkness set in. By dark, the sky was completely clear as the stars came out and the crickets were almost deafening. As always seems to happen to us, we were befriended by some animals, a pair of white ducks on this occasion, that waddled about the site.

We set off for Nashville, two hours away, on a hot, sunny day. En route we stopped at McDonalds for a quick coffee and Dave saw a guy with a huge Nazi tattoo on the back of his neck. Nice. The Confederate flag is much in evidence in these parts. It’s hard to know what that means really, especially after recent events in the south. Is it just a show of southern pride or something more sinister and given recent pressure to remove Confederate flags in the south, is it a racist act of defiance or just a determination not to have the flag identified as a racist symbol (just like the Union Jack in the UK is associated with far right groups)?

A year ago, I would not have given a moments thought to Nashville as a city, being a hater of country music, but the TV programme changed all that. I can now almost tolerate some of the tunes and have a hankering for a pair of knee length, black $3,000 cowboy boots as worn by the character Rayna James.  Still not sure about the big hair and rhinestones though. Our Airbnb was located on the edge of East Nashville,  a super hip and very attractive neighbourhood of wooden painted bungalows with big porches, full of trendy bars and restaurants. It is also the home of characters like Deacon, Scarlett and some of the other younger folk in the TV programme . It looks much nicer in real life. Our Airbnb was exceptionally good there. We used Uber for the first time to get into downtown. What a great experience. Easy, cashless, cheap and with super friendly drivers. Our first two bars were pretty quiet. We started at the Riverfront Bar and then moved on to Fleet Street Pub for a great veggie burger and chips and mushy peas. 10 out of 10 for the food. 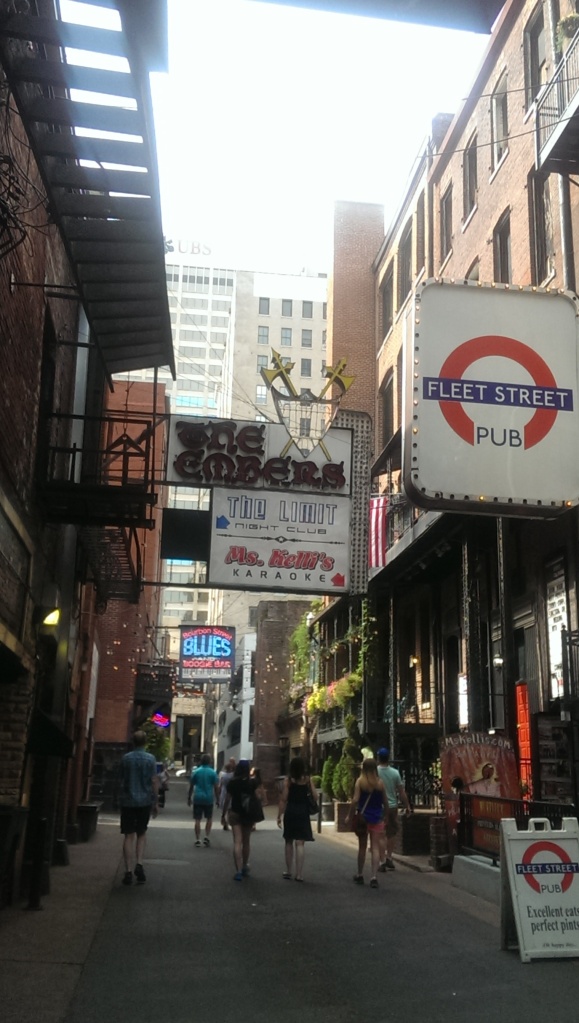 We wanted to find more action and headed for Lower Broadway. Like a cross between Pattaya and Blackpool on a Saturday night but with no ladyboys (as far as I could tell) or kiss me quick hats (that reference ages me). Country music booming from packed bars at 5pm and shops selling cheap ($450) cowboy boots. Hen parties everywhere. Nowhere to sit. Tacky as hell. 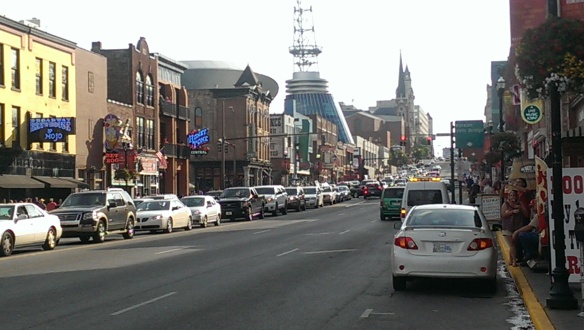 Great to see but not our thing these days (not sure it ever was) so we headed to another quiet, cellar bar near the river and then on to an almost empty karaoke bar called Ms. Kellis (!). A beautiful black girl got up, looking very confident with the mike and we thought we were about to the witness the next Aretha Franklin. Wrong. She sounded terrible but exuded joie de vivre and was rewarded when a bunch of drunk southern girls piled in the door and starred singing along and dancing-all before 7pm.

The highlight of the trip so far was the Alice in Chains gig. The Ryman is a truly historic venue where the Ole Opry used to be broadcast until it was moved in 1974. Of course, it started life as a church and still has beautiful stained glass windows and wooden pews.

It is tiny compared to modern venues, holding about 3000. What a total privilege to see one of your favourite bands in such an intimate setting. We were on the balcony but I could see everything. It was a great gig. The did all my favourites (they always do) and we got to shake our heads, jump around and lose ourselves for two hours. We bought a veggie dog on the way home with sauerkraut. What a wonderful thing to soak up the beer. My neck hurts today and Dave is deaf (not sure how I can hear and he can’t but I think my hearing was better to start with) but at least we haven’t lost our voices. On our way out of the city, we ate a hangover brunch at the popular Wild Cow vegetarian restaurant. Berlin veggie restaurants could learn a lot from this place about how to make vegan food tasty and healthy (photo of Dave’s brunch courtesy of The Wild Cow website). 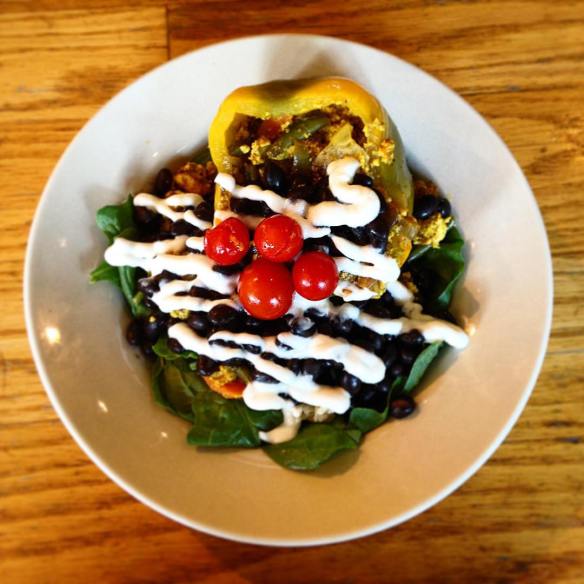