From asteroids, you know

Polo Motorrad had them in stock so Tiger now has three beautiful iridium spark plugs.  I saved a fortune (€18.00) by riding a superior triple instead of a four.  Apparently, even BMW boxer twins need four because they are twin plug heads.  This is schadenfreude.

I can’t wait to ride the bike and imagine I can feel a difference. 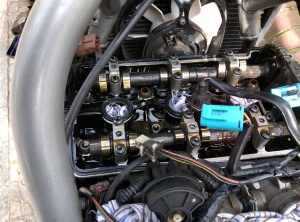 Valve clearance found to be ‘not tight.’ They can be as loose as they like (in my book).

Checking them is one thing but adjusting them is another.  To check them, you need a feeler gauge and enough daring-do to delve as far as I have.  To adjust them, you need a fabled special tool that no one has ever seen, or you have to remove the cams.  That makes me nervous just saying it.  I’ve done it twice (valve clearance adjustment) but that was when I was young and fearless.

So it was with some trepidation that I checked each of the clearances.  They were all over the place, no two the same, but none of them were tight.  So that’s the end of the story and there’s no need to pursue the matter any further.

Mirror shows Woman in Black standing behind me as I take the picture. This is all I need.

You lot: Were any of them too loose?

Me: I didn’t check.  As long as they are not tight, it doesn’t matter.  Too loose will reduce power (and increase torque?) but do no engine damage so I’m actually being nice to the old girl.

You lot: You did half a job.

Me: None of them were tight.